It has come to my attention over the past few years while partaking in the Toilography project that there are a handful of toilet-themed restaurants dotted around this crazy wide world. That’s right folks: actual eateries where the decor consists of life-size basins, bowls & bathroom accessories; where drinks arrive in toilet teacups and food is served on powder-room plates.

The first of these such diners I became aware of was Modern Toilet, a Taiwanese institution founded in 2004 that has since expanded across the country and even branched out into Hong Kong. However more recently I discovered the existence of a second toilet restaurant chain based in Malaysia, with the apt name of T-Bowl Concept Restaurant. It is claimed the idea behind this particular concept came to fruition while the owner, Samuel, was one day sitting on the loo, pondering what it would be like to eat whilst undergoing his business. It wasn’t long until the entrepreneur opened his first T-Bowl restaurant in Penang in 2008, followed by a second outlet in Kuala Lumpur in 2009.

I was recently lucky enough to stop by Kuala Lumpur on a day-trip following a weekend in Singapore, and I couldn’t help but drop into Sungei Wang Plaza to witness this unique lavatory lunchroom for myself!

I arrived in the early/mid-afternoon, just following what I assume was the busy lunch period. The eatery itself was closed for cleaning, and after a quick glance of the inside adornments I was instead ushered to a food court area in front of the restaurant. Although still featuring a bathroom backdrop with basins to eat at and toilet bowls to sit on, this open area in the centre of the plaza didn’t quite have the same atmosphere as the inner space that I’d missed the opportunity of dining in. Thankfully the room opened back up by the time I finished my meal, and the wait staff kindly allowed me to walk through the inside and snap a few photos:

The vibrant entrance to the T-Bowl restaurant 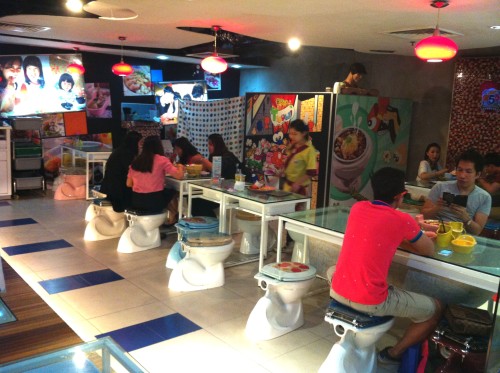 For those who prefer more of a squat-style seating formation 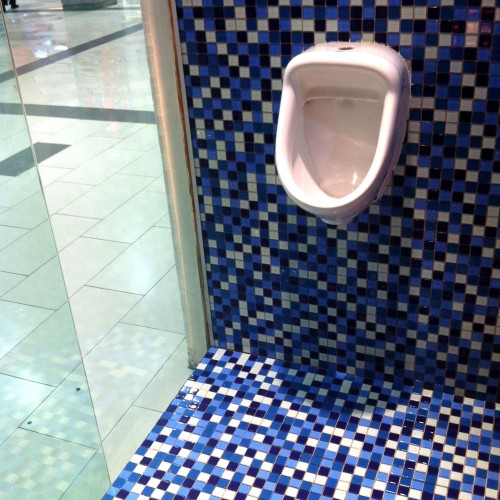 Looking into the restaurant from the outside, complete with bath-related memorabilia

The selection of food on the menu was affordable and relatively broad with a large emphasis on Japanese & Korean cuisine, but also featuring some western, Taiwanese and traditional oriental items. I ordered the grilled chicken in turmeric sauce along with a side of fresh fruit and some hot wulong tea. Of course the main course came served to me in a toilet-themed dish, with the fruit and tea appearing in similarly-themed receptacles.

The food was surprisingly delicious considering my awkward surroundings, and as an added bonus for dessert: just for liking their Facebook page and checking in with a photo, I scored myself a free chocolate ice cream! (Yes, the ice cream too was presented in a toilet bowl – not to mention the appropriate shape of the frozen treat) 🙂 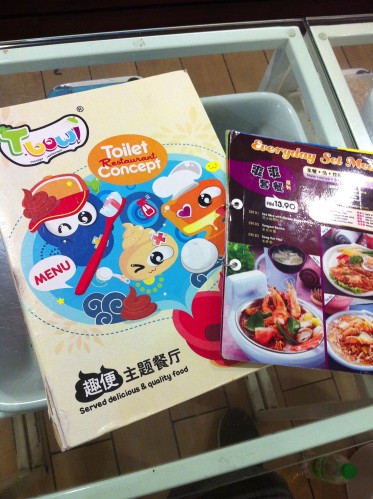 This was one of the few foul-named items available on the menu!

I had the grilled chicken in turmeric sauce, which came complete with wulong tea in a toilet mug

A closer shot of the fruit and wulong tea

I’m happy to say that my first experience at a toilet-themed restaurant was a positive and interesting one, and I left with an intrigue as to exactly how such a concept seems to have taken off in popularity throughout Asia. If you ever find yourself in Malaysia then this is your perfect opportunity to try something a little different from the norm. I highly suggest you drop by and grab yourself a meal there.

You can find more information on the T-Bowl Concept Restaurant at their website and also their Facebook page.